The winners of the 22nd edition of Green Cross Italy’s Earth Charter Youth Contest received their awards at the Italian Senate on Friday, 27 February, 2015.

The 300 winning students, chosen from over 32,000 participants from 1,300 schools across Italy, celebrated this year’s theme: « Da cosa (ri)nasce cosa » (from something (re)born, something new). 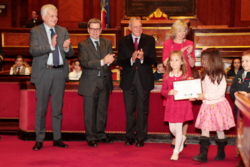 The programme saw young people take action for a more sustainable Italy, such as by building vertical gardens out of plastic bottles, keeping old computers out of the landfill by making accessories out of them, or creating a puppet theatre with pieces of cloth, envelopes and cardboard.

The winners’ creations were exhibited in the Garibaldi room of the Palazzo Madama. Each of them represented the theme of the 2013/2014 programme and illustrated the importance of the four-“R” rule (reduce, recycle, reuse, recreate).

The ceremony was opened by the message of the President of the Italian Republic Sergio Mattarella, who expressed his appreciation to Green Cross Italy for the initiative and for “their continued commitment to spreading an entrenched ecological conscience.”

“This initiative is an outstanding example of the association’s activities,” said Mattarella. “For years it has represented an important opportunity for reflection and dialogue between generations to encourage a culture of sustainability, based on good land management and environmental responsibility, the protection of ecosystems, and respecting biodiversity.”

The President of the Italian Senate, Pietro Grasso, presented the awards during the national Earth Charter Youth Contest ceremony (« Immagini per la Terra », www.immaginiperlaterra.it), an initiative jointly promoted by Green Cross Italy and the Ministry of Education.

The students also met the Minister of Education, Stefania Gianni, and the Minister of the Environment, Gian Luca Galletti. The ceremony was moderated by Camila Raznovich, presenter of the Rai channel programme Alle falde del Kilimangiaro, and the actress Geppi Cucciari. 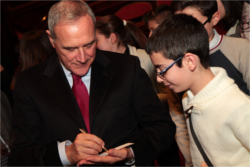 These young people clearly take ecological issues seriously and showed they are ready to act to create change. Unfortunately, the good practices recommended by the young are not always followed through on by their elders. In Italy, according to the data released by Ispra (the Higher Institute for Environmental Protection and Research), certain Italian regions throw between 70 and 90 per cent of their waste into landfills, despite the fact that some others are able to achieve a recycling and composting rate of 64 per cent or higher.

“The young have already started to turn the page and are changing their way of life and consumption habits,” said Elio Pacilio, president of Green Cross Italy. “They ask their schools, civil society, and institutions to support and encourage them, but also to commit with concrete action. And we cannot disappoint them. With this contest, we followed a direction already set out in previous years. For the next edition, « Per un pugno di semi » (for a handful of seeds), taking place in the framework of the Expo Milano 2015, we will invite the students to confront the themes of food security and biodiversity conservation.”

The original text, in Italian, can be found here.