Skip to content
Every year, Green Cross Italy marks Holocaust Memorial Day by organizing a new initiative to sensitize young people. For 2015, 70 years on from the liberation of Auschwitz, they join a group of school children in a special commemoration. 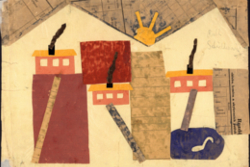 The Istituto Comprensivo Balsorano, a school in San Vincenzo Valle Roveto (AQ), is participating in the #Semina il futuro (“Seed the future”) campaign. This is connected to the 23rd edition of the national “Earth Charter Youth Contest (Immagini per la Terra)”, which this year is called “Per un pugno di semi (A fistful of seeds)”. The contest advocates biodiversity by asking schools, families and individuals to share pictures of themselves planting seeds on the Facebook page for “Immagini per la Terra”.

The Balsorano students have chosen to plant yellow crocuses, a flower symbolizing the one and half million Jewish children who were victims of the Holocaust.

Through this action, the youth symbolically recognize the traumatic experience faced by Terezín children who, during World War II, produced more than 4,000 drawings kept today in the Jewish Museum in Prague. To explain and understand the relevance of this unique documentation, Green Cross interviewed Michaela Sidenberg, Curator of Visual Arts at the Museum.

How many drawings are kept in the Museum? Is this the whole collection or any of them have been lost?

The Jewish Museum in Prague’s (JMP) collection of children’s drawings from Terezín comprises 4,387 originals. It presents the largest collection of children’s art from the period of the Shoah in the world, and it has been housed at the JMP since the end of WWII. There have been some minor losses to the collection in the period of 1945-1994, mainly due to the fact that throughout those years the numerous exhibitions of Terezín’s children traveling the world were composed of originals. Nowadays, originals go on display only very rarely and for a very limited period of time due to the extreme fragility of the material – for the most part, originals have been replaced by high quality copies (facsimiles). More than a decade ago, the entire collection of children’s drawings has been digitized, so now it is possible to use this vast digital archive of nearly 6,000 images for research and presentation. During the first semester of 2015, the collection will also be made available to the public as part of the JMP collection online project.

How was the collection kept safe from Nazi inspection? Who had been the keeper before and immediately after the War?

Even though the organized education of Jewish children had been strictly forbidden since the time of the 1940 edict that prohibited them from attending school, permission in the ghetto was eventually granted for instruction in crafts, drawing, and singing. To this were gradually added, even if illegally, the teaching of languages, literature, history, and the basics of the natural sciences. In this respect the Terezín children received the best attention as their teachers, fellow inmates in the ghetto, were among the top scientists and artists. 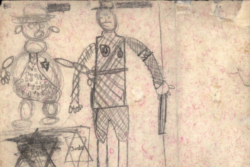 Is it possible to faithfully reconstruct children’s daily life in the concentration camp from collected documentation and materials?

As the initiator and curator of the newly developed permanent display of children’s drawings that will be presented at the JMP premises in several years – and that will focus not only on the general history, but mainly on the individual stories and the exceptional personality of the teacher Friedl Dicker-Brandeis and the unique teaching method that she had helped to develop and subsequently used in the extreme conditions of the ghetto – I am of course attempting such reconstruction. Although a complete and faithful reconstruction of the life in the ghetto cannot be achieved for obvious reasons, we can learn a great deal about it from archival documents, oral histories (mainly from interviews of survivors who had the privilege to study under the tutelage of Friedl Dicker-Brandeis), and, last but not least, the drawings themselves.

Do you think that the normal scenes appearing in Terezín drawings, such as those concerning friendship, celebrations and walks, represented a way to escape from pain?

As Friedl Dicker-Brandeis explains in the concept for her lecture, which she held in the ghetto in 1943 and in which she explained the motives and methods of her pedagogical work, a great emphasis was put on the therapeutic effect of art classes. However, the primary goal of art teaching in the Terezín was to establish an alternative curriculum in which the children, who were torn out from the safety of their homes and deprived of standard school education and social ties, could gain an equivalent and complex educational substitute that would enable their intellectual and emotional growth and that would also maintain or strengthen their social skills.

In most of the Terezín children’s texts and poetry there is also an extremely realistic and pessimistic vision of the future. Why do you think that is?

The Terezín ghetto was a transit concentration camp where inmates – adults and children alike – were afflicted with starvation, diseases, lack of basic medical care and all other sorts of deprivations, including the constant psychological terror of living from day to day in fear of being deported further to the East. It goes without saying that in such gruesome conditions there was very little (if any) space for optimism. On the other hand, as we are learning from the artworks that were created in the ghetto and also from the survivors’ testimonies, there was always hope among the inmates that the war would end soon and things would get back to normal. This hope was naturally also reflected in some of the children’s drawings depicting the dream-like scenes of marching back home or going to Palestine. 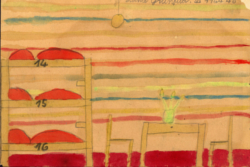 In Terezín the drawings are no more just children’s drawings but testimony, documentation. Can you tell us how this transition happened?

Every scrap of paper from the period of the Shoah is a sui generis testimony and children’s drawings (or any artifacts that originated in Terezín between 1941 and 1945) are not any exception to this rule. Although their creation may have been driven primarily by the need of artistic or creative expression, their content naturally encapsulates many details and observations that are of enormous documentary value and that could never have been reflected in written records.

What have you planned for Holocaust Memorial Day?

There are many activities that the Jewish Museum in Prague initiates and organizes throughout each year to commemorate not only the anniversary of the liberation of Auschwitz, which falls on January 27, but also other important dates in the calendar directly related to Shoah history, such as March 8, which marks the liquidation of the so-called Familienlager (family camp) in Auschwitz-Birkenau, Yom ha-Shoah, that according to the Hebrew calendar falls on 27th day of Nisan, November 9, that marks the events of Kristallnacht, etc. The JMP organizes not only exhibitions, but also concerts, lectures, debates, film screenings, and other activities accessible to the wide public. In addition to its own activities, the JMP also helps others in organizing their own commemorative and educational programs, i.a. also by lending them exhibitions of children’s drawings from Terezín.